Arms Up for Em 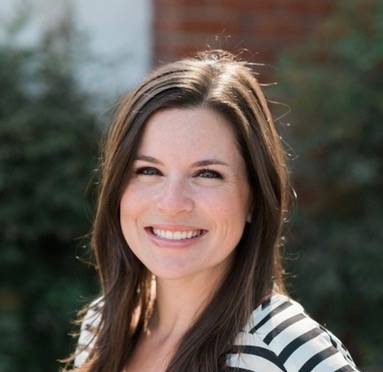 It was just an ordinary night of practice at the gym for Emily McClung, until a common mistake literally landed her in a life changing situation.

Emily had just finished up a strong warm-up on bars and was feeling confident and excited that it was going to be a great bar day!   While most gymnasts find bars to be the most difficult event, Emily felt the opposite. They were her favorite!  Tonight, however, as she was nearing the end of her routine, she made a near fatal mistake by pulling in too much on her flyaway.

A flyaway is a dismount from the high bar wherein the gymnast releases their body from the bar to make one or more rotations before landing. Closing your shoulders is a common mistake because while the correct technique is to slightly throw the bar behind you upon releasing, it feels natural to pull in to increase rotation and flip faster. However, pulling in brings the gymnast closer to the high bar and can result in hitting the bar on the way down. 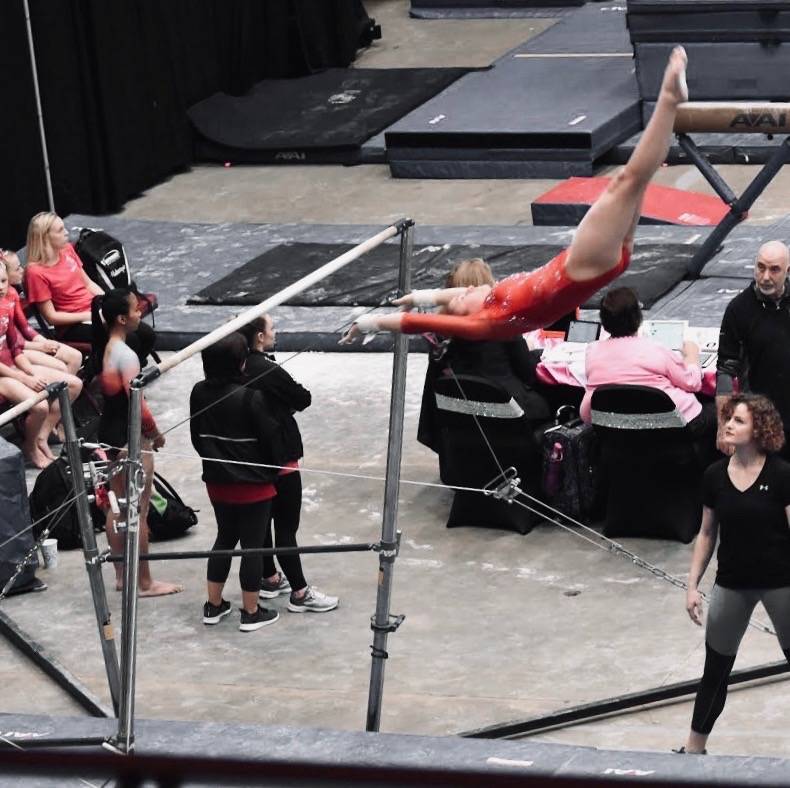 Almost every gymnast has caught their feet or toes on the high bar at least once. This usually results in a bruised foot or bleeding toe, nothing too serious. But unfortunately for Emily, this common mistake resulted in a horrific experience that she and everyone in the gym will never forget.

Just as Emily's mom, Cristie, was returning to the gym, after running some errands, she sat down to watch the rest of Emily's practice and witnessed one of the scariest moments of a mother's life. She watched Emily closely, consciously thinking about what a great practice she was having, and was excited to see the end of her routine. As Emily dismounted, Cristie watched in horror as she realized that Emily had pulled in way too much! As she swung through the air, she abruptly hit her shins HARD on the high bar, which sent her entire body into a swan dive, falling over eight feet, head first. Naturally her arms reached out to brace the fall, but all Cristie could see was that her daughter had fallen on her head and lost all rationale as she thought she had broken her neck.

“I kind of lost my mom senses when it happened.

I just thought she had broken her neck after watching the fall.  When I saw her elbows I couldn’t think about what I needed to do.”

Two coaches rushed to Emily's side and quickly sprang into action. At first, no one was quite sure what was hurting the most. Was it her neck?! Was it her face?! Was it her arms?! While her coach consoled Emily and friends calmed Cristie (who was going into shock from thinking her daughter broke her neck), another coach called for an ambulance.

They waited for what seemed like an eternity, while Emily screamed in pain, for the ambulance to arrive to take Emily to the hospital. The entire gym was silent, watching, praying and trying to help in any way they could. When the ambulance finally arrived, they got Emily into the back to begin working on her and Cristie jumped in the front seat to ride with them to the hospital. Crying, Cristie called Emily's dad to tell him what had just happened to their daughter. Emily's dad and her two brothers were over an hour away but immediately left for the hospital as well. 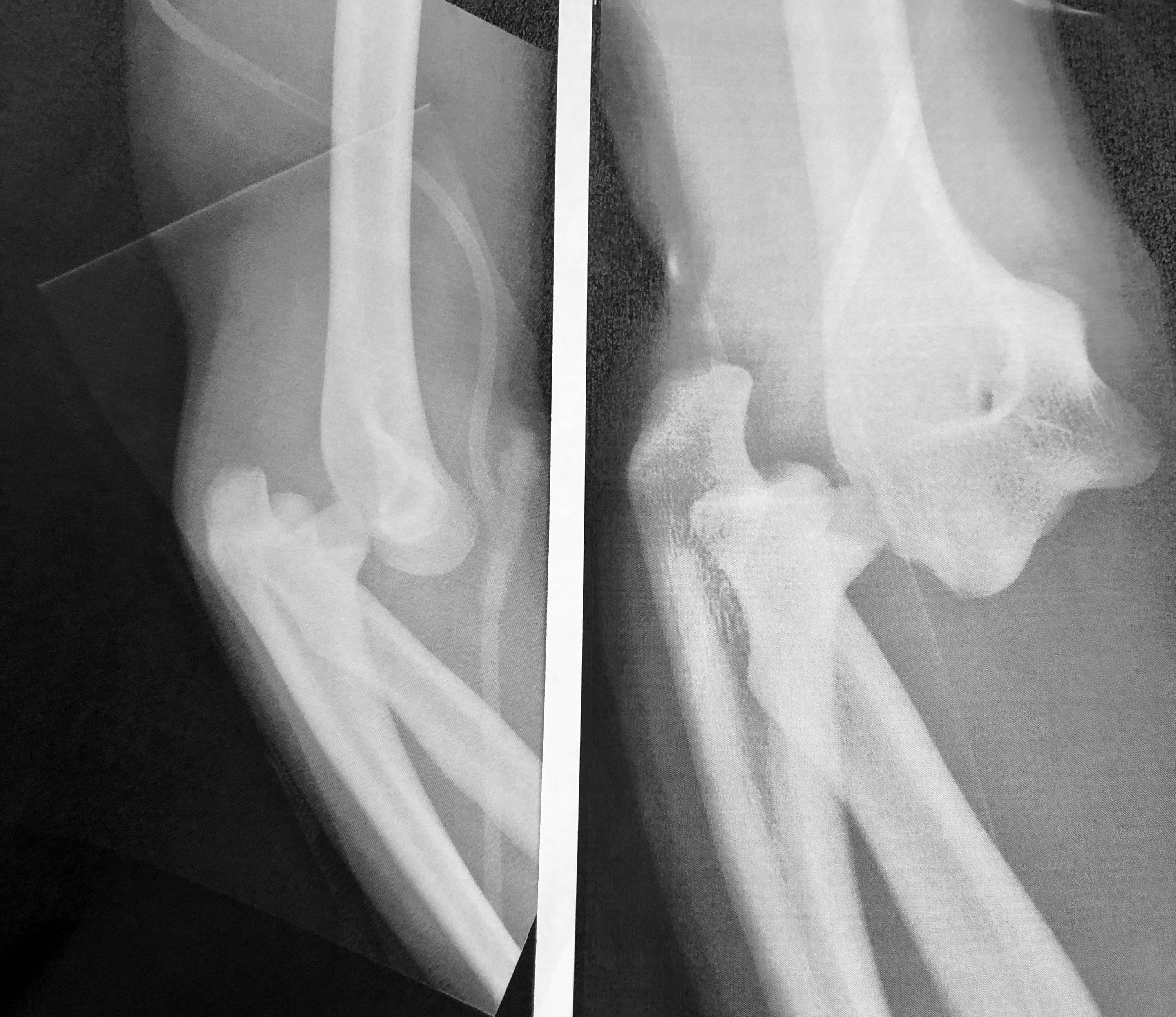 After a generous dose of morphine to make Emily more comfortable, she was able to breathe a little and calm down some. An X-ray at the hospital showed that she had dislocated both of her arms, breaking the left one as well as sprained and dislocated her left wrist.

“She was quite humorous on all the medications. She had everybody laughing.”

But the worst wasn't over yet.  After already having experienced the horror of her fall, Emily then had to endure the insurmountable pain of having both arms set back into place by the doctors.  Emily's family listened helplessly down the hall as she screamed for the second time that night in unbearable pain.  Her family was heartbroken for her.

While it was a terrifying night for both Emily and her family, everyone knew that in reality, she was incredibly lucky to have caught her fall with her arms instead of her head and neck, as things could have been much worse or even fatal.

“Things could always be worse. I almost landed on my neck that day, and it would’ve been way harder to come back from that one, and for that I am grateful.”

Emily was placed in splints from the tip of her fingers right up to the top of her arm pits and was told by the doctors that it would be at least a three to four month recovery time. Not only was she missing out on gymnastics for months and having to work through the pain, but she had just become completely dependent upon others to do literally everything. Anyone who has ever broken a bone before knows, things previously taken for granted suddenly become very difficult and Emily had hurt not one, but both arms. 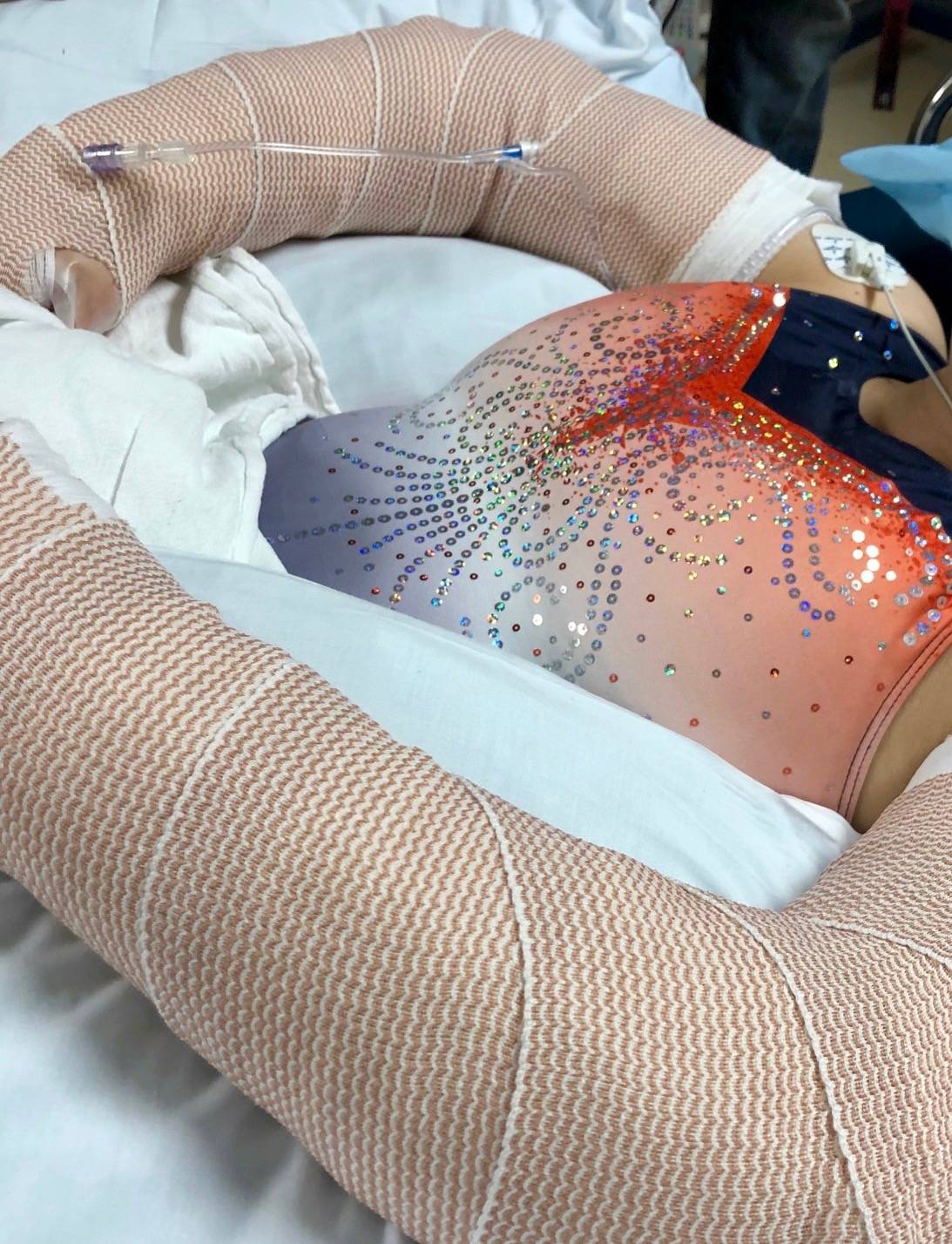 At first, she wasn't even able to walk around without someone helping to hold her arms up and at night, she had to sleep uncomfortably upright. Eating, brushing her teeth, opening doors and personal hygiene all required assistance now. The inconvenience was maddening. Especially to her dog, who couldn’t understand why Emily wouldn’t scratch her behind her ears anymore. 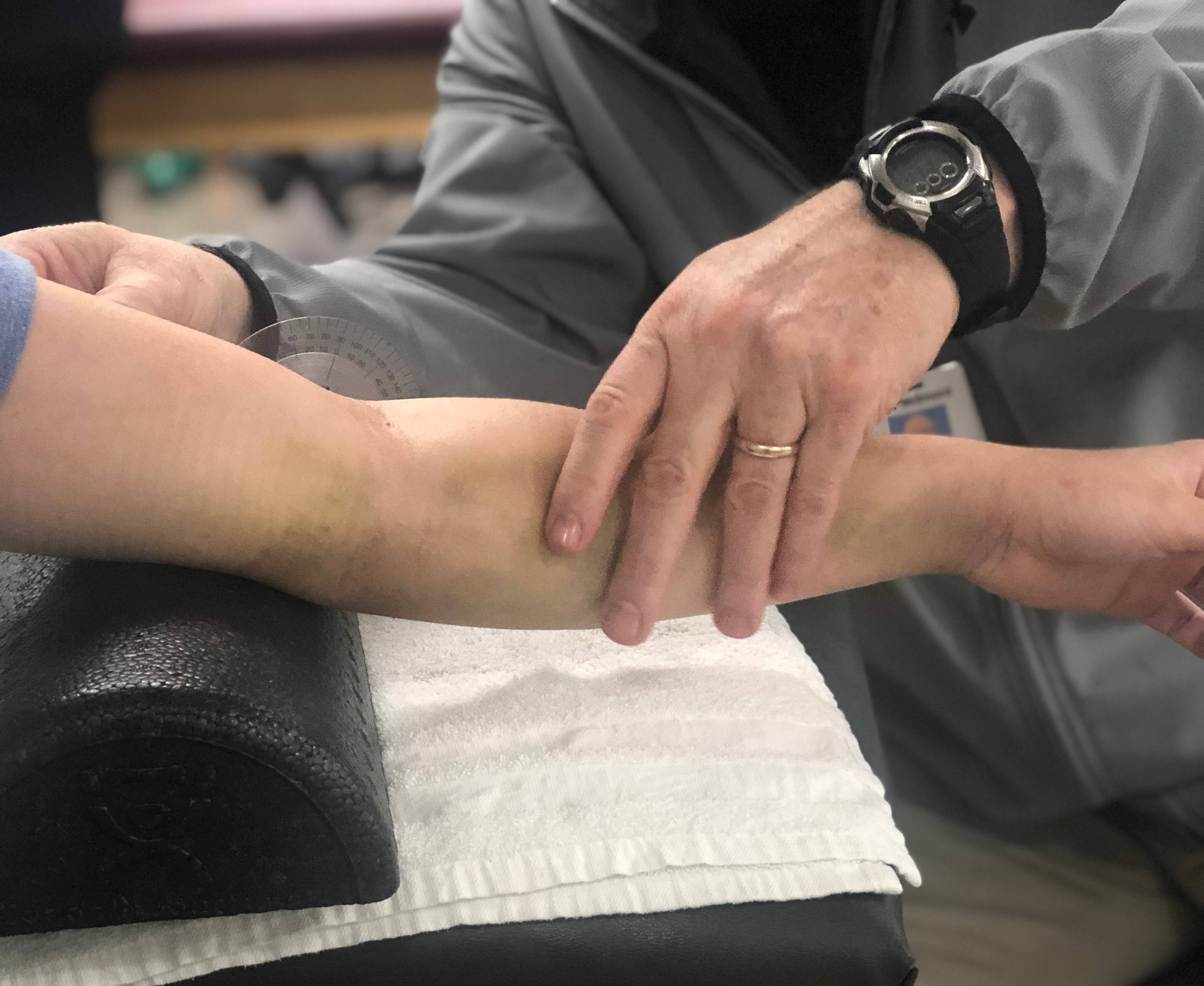 Physically and mentally, it was an extremely tough recovery for Emily. After some time, she was able to attend physical therapy twice a week, and occupational therapy once a week, to start rehabilitating her strength.

Seeing how much work was to be done, Cristie told Emily that she didn't have to continue with gymnastics if she didn't want to, but Emily lost her mind at the mere thought! While the injury was definitely a set back, and the thought of calling it quits had entered her mind, Emily was determined to recover properly and get back out there stronger than ever! She knew what mistakes she had made in that moment and was confident she would be able to fix them. Emily's family, coaches and friends became an incredible support team for her. Everyone stayed positive and kept her spirits high so that she wouldn't be afraid to get back to doing what she loved most.

“A difficult situation doesn’t mean you give up. It means you fight harder and make a comeback. Hard work and determination are rewarded.

My comeback will be my reward!”

Emily's accident and injury brought some new realizations to light. She was trying and pushing to do better because she wanted to, not because anyone else wanted her to. After being forced to take a break, she had time to think about how much she truly loved gymnastics and realized that nothing was going to stop her from getting back out there, no matter how hard she had to work for it. She had discovered the importance of a positive attitude and the power of the “win or learn” mindset. 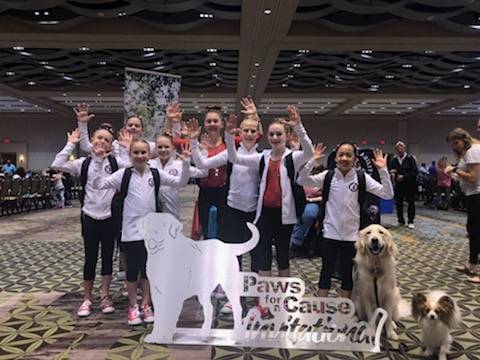 Teammates sent pictures from their meet with their "arms up for Em".

“It’s hard trusting someone else with your child, but I’ve learned to trust the process.” -Cristie

Her daughter’s injury forever changed Cristie’s view of her role as a parent of a gymnast as well. Gymnastics, like many sports, is notorious for parents wanting success so badly for their children that they push them beyond their limits- whether it be reaching higher levels, getting big skills, winning meets or gaining scholarships. In such a competitive environment, it becomes easy for parents to lose sight of what is most important, like health, happiness and the pure love of the sport!

Cristie realized that it was no longer about just meeting those goals, it was bigger than that. Gymnastics as a whole was not just teaching her daughter physical skills, but also bringing her friendships, support, and teaching her important life lessons. It was more about the process and the journey than the result. She knew she couldn't love it and want it for Emily, Emily had to love it and want it for herself. 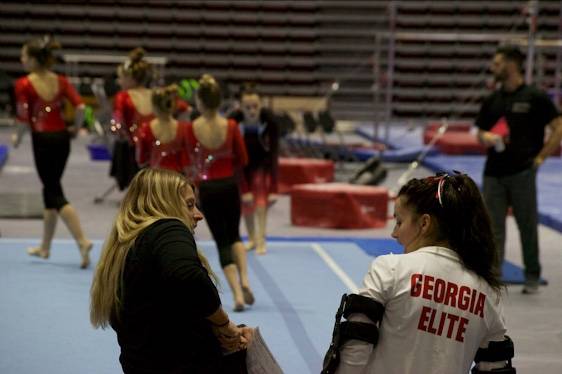 Emily’s favorite coach and both Cristie and Emily’s hero, Ashley Sellers, offering words of wisdom while supporting teammates at a meet.

Gymnastics was and is everything to Emily.  While her injury temporarily took a piece of happiness from her, it simultaneously brought her a whirlwind of clarity, love, support, friendship, knowledge and a strength and determination that could only have come from a place of great loss and struggle.
She gained so much more than just a level up or a mastered skill.  She embraced the process, grasped her will and love and pulled it through the complete journey to become a passionate, devoted, and whole-hearted... gymnast!

to see more pictures and follow along on her incredible and inspirational journey to complete recovery. 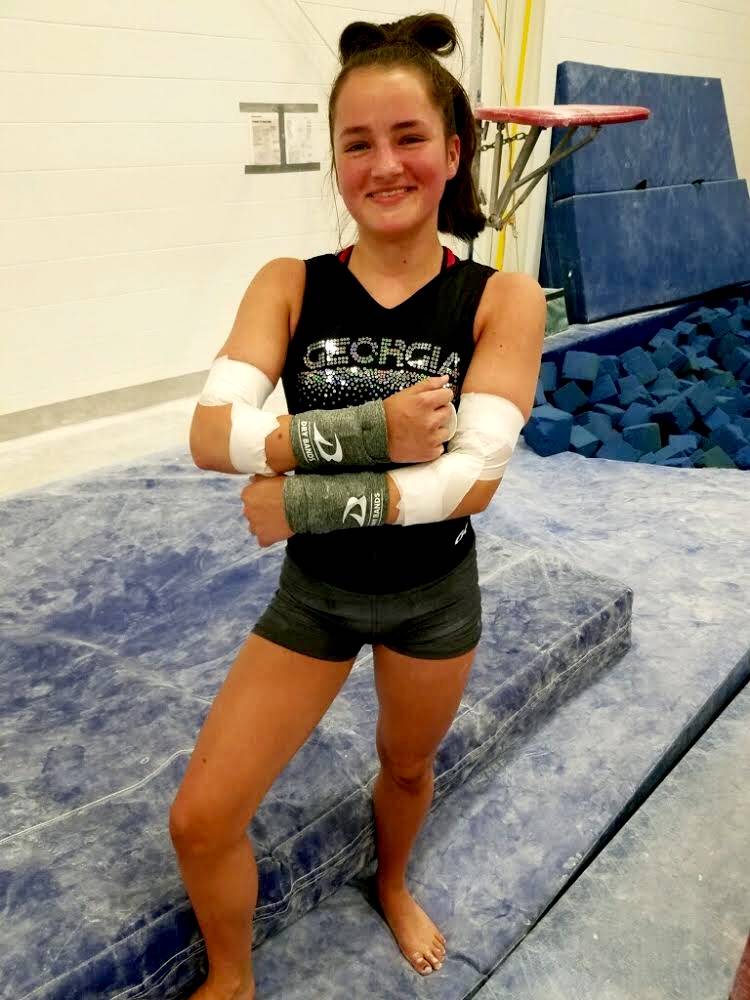 Back to A Dose of Inspiration